Undoubtedly, Brexit casts a shadow also to the development of the European primary election system. If by spring 2016 we had meaningful discussions regarding primary elections in 2019, even on the funding approach, this British shockwave froze the constructive thinking.

Primary elections are seen by some parties as a step towards European federalism. The British vote against the EU imposed a reactive mindset. Statements like “Let’s wait until Britain will activate article 50…” and “We should analyze the impact of the British exit in each of the EU sectoral policies…” are just some of the phrases found in the hallways of the European institutions. Some voices even suggest a tempering of the European federalism.

It is appreciated that European leaders have launched a major project to rethink the future of the EU. We will not call it European Convention, as too many remember the link with the aborted 2005 European constitution. But it will launch a wide debate and “let’s meet again in Malta in March 2017 to celebrate the 60th anniversary of the Treaty of Rome…” as was stated as one of the conclusions during the Summit in Bratislava in September 2016.

Primary elections are still a fashionable electoral process, which delights the electorate. The United States, France and Italy are countries that believe in this mechanism. But why at the European level do we not yet trust it?

It’s paradoxical, but I think the Brexit will speed up the European primary elections. Not now, but by next spring, European political parties, emerging from Brexit hibernation, will discuss the real consequences of involvement in this project. It is a process similar to the years 2008-2012, when the financial crisis led to an acceleration of European integration, opening the door to the Banking Union in the EU.

A European identity is not “the T-shirt that you can wear just a week in Strasbourg” and then undress to seem cool to voters. There is not a part-time job or a cheap philosophy. Like in Russian roulette, the bullet was put in the pipe on June 23 and at least 48.1% of British have understood too late in what hazardous position they put themselves and their local politicians.

Yes, the EU coordination mechanism should be revamped to give European citizens confidence to come and connect with developments. This is no time for populism, or for fanatics without limits. Brexit made us all aware of the possibility of not having a European Union…

European political parties, representing the 27 EU countries that will send representatives to the European elections in 2019, have the duty to rethink communication with citizens and the mechanism of primary elections should be continued…

Some open questions we should be asking, in relation to the primary elections are:

Dr. Dan Luca is the Senior Director of EurActiv and also lectures on topics related to communication techniques and the European Union at ULB Brussels, VUB Brussels and SNSPA Bucharest. 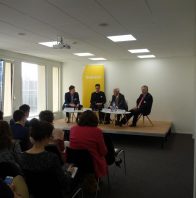